I checked out a friend of mine’s post to see that I made her street style portion for MBFW 2011…check me out here! 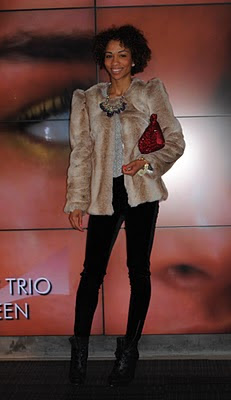 Ok my weekend went a little something like this…..I ended missing my first bus to NY….bummer but got on the bus that was 30 mins later so it worked out. When we got to NY, we mapped out where we were going and when we got to the hotel, the system was down for like 3 hours. I was slowly getting frustrated because we were sitting around doing nothing. So when they finally got our room, it ended up being extremely small….like NYC makes everything tiny…LOL, it’s sad. We started to get ready for our evening which we had some slight plans for different spots. We first stopped by Sephora on 59th, nice little mall and went up to Samsung which is where they were doing Nars make up consultations. It was a really cool Samsung where you could try the 3-D tv’s and they had little home vignettes which was cool.

After this we headed to a club called Providence that I had been to before. We got there a little early so I got some cheesecake from the spot next door…it started out tasty but ended not being extremely great. It was a cool crowd. The dj did pretty good. I love DJ’s in NYC. We stayed here for a while waiting for our friend that got lost, we got so lost in NYC and missed 1 stop that took a whole hour to get back to, crazy! We were viewing some foolery there with a woman taking her underwear off…#WTDTA…disgusting. It was so nasty. Anyway our friend finally got there and we headed to the next party which was supposed to still be going on but when we got there, it was empty. We were looking around like is this a joke, but come to find out, a fight broke out and it got shut down. We had to come up with our next move which ended up being our best move. We ended up at a party where Q-tip was the DJ, Kid Cudi was there chillin, and then Taraji P was there dressed extra regular just having a good time. We partied so hard here. Q-tip didn’t play anything off the radio, it was so cool and the music was old school. It made me feel like I was in the 80’s. Anyway before we knew that that was Taraji, she was dancing all crazy in front of the DJ booth then tried to pull one of my friends to battle and we were like who is this chick and as soon as we found out it was here, I snapped a pic and her security guard got mad…OOPS…my b! LOL. But the night ended up getting even more fun. We started pumping through the club…lol…and I think one of Taraji’s security guards starting pumping, we were like whaaaa….oh ok…LOL!

Saturday which was our last and final day to do anything, we decided to try to stop by the Lincoln Center and we got twisted and turned around and ended up heading to brunch extremely late. I decided to go to the same spot that we went to last time with a friend. It is called Macondo. When I say everything there tastes great, it just does. We all got the unlimited Mimosas….YUMMY!!!! =) After this, a friend that we made in NY took us over to the Lincoln Center, extra cool guy. Be looking out for Rich February, he has some pretty cool music too. We got to the Lincoln Center and just took in the ambiance for a little bit, it was cold. We then decided to head to the networking event that we signed up for and it was a nice little crowd there, I gave out a few cards and conversed with a few new faces while we all drank wine…yums! After this, we headed back to the hotel and everyone was beat. We all took naps and then didn’t end up heading out until 1:30am….only in NY can you do that and the party would still be going on…LOL. We headed to a spot called Gold Bar which was one the coolest bars/lounges I have ever seen. They had these huge mansion doors that you entered, then you went through a curtain….it was DOPE! It was a bunch of drunk cottonballs bumping into us but all in all cool spot! After this we called it a night!

This concludes the trip and the last day before getting on the bus, I was determined to get some food from a street vendor, so I got the Chicken Gyro, YUMMY!!!! My pictures were a little blurry but enjoy! =P